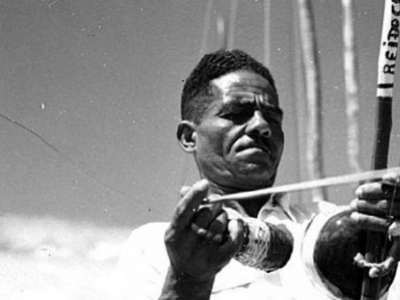 Automatic translation. Original in Portuguese. In the process of improvement. Thank you for your understanding.

The presence of the berimbau is essential for a given event to be recognized as a round of capoeira. At the beginning, the assimilation of berimbau within capoeira rested on the disguise of its subversive and martial character which, under the cloak of dance and music, hid a type of bodily struggle. On the other hand, this is proof of what we call the multidimensionality of African cultures, a condition which is essential in all Afro-descendant artistic manifestations.

Thus, the appearance and presence of musical instruments, berimbaus or others, result from this immanent condition of African or Afro-American culture, in which the musical, dancing, clothing, culinary and religious aspects merge into one expression coming from diaspora cultures which have introduced into their structure the aspect of multidimensionality of which music and musical instruments are the constitutive and fundamental elements.

Valdeloir Rego even quotes an investigation which marks the presence of berimbau in Cuba. Also remember the type of "mouth berimbau" (berimbau de boca), widely used in Africa, but also in Europe. These occurrences "in various corners of the universe", according to Rego, correspond to the vagueness of its possibly African origin. Currently, there is no need to associate capoeira with berimbau, which has long permeated the imagination of this cultural practice. The instrument is so associated with the capoeira round that the latter would be inconceivable without the use of this musical arc.

The shape of the berimbau is simple and its materials, to some extent, are still easy to collect in nature, with the exception, of course, of the steel rope, called "arame" in the middle of the "Capoeiragem" . The berimbau was probably one of the first creations of musical objects emitting a sound by the vibration of a string.

The most important part of the berimbau used in capoeira rounds is the wood (verga), called Biriba (Eschweilera ovata), which is commonly found along the Atlantic Forest of Bahia State. A wire is attached to the two ends of the wood (verga). At the upper end of the berimbau, a circular piece of nailed leather serves as a pulley / protection to curve the berimbau. The gourd (calabash), with an opening or a "mouth" of variable size, must be fixed at the lower end of the wood, at a distance of about a hand length.

To complete the composition of the berimbau, there is also a copper duplicate which, when in contact with the wire, modifies the tone of the sound which resounds from the calabash. The thin wooden stick should not exceed the conventional size of two hand lengths and at least one and a half hand lengths. Finally, the last article corresponds to an accompanying musical instrument "the caxixi", a rattle producing an acute sound, composed of wicker straw braided on a circular piece of calabash, which serves as the basis for the seed (known as tear of Our Lady - Lágrima de nossa Senhora), will vibrate to produce a sound similar to the rain falling on the leaves of trees.

Unfortunately, Biriba is increasingly rare due to the intensive exploitation of this tree for the marketing of berimbaus. Today, they reach the international market through websites selling percussion instruments or from the hands of capoeira masters around the world. The use of berimbau on Brazilian soil was common in several scenes of daily life in Rio. For example, it was part of the street vendors' outfit of the colonial Rio de Janeiro.

Despite its permanent presence over the centuries, it is remarkable that its shape has hardly been modified, only certain materials having been replaced by others, which did not compromise their basic structure. Thus, the vitality and the resistance of this musical instrument can be verified, allowing it to go beyond time, cultures and borders.

In traditional capoeira rounds, three berimbaus are used, creators of the binary rhythm cell that characterizes most of the "toques" (rhythms) of capoeira. They are: the berimbau gunga, the largest and most serious of all; the berimbau medio, which, as its name suggests, is situated in an intermediate sound; and the "viola" responsible for the high-pitched sound of this instrumental triad. The arrangement of capoeira instruments in a round is guided by the conventions generally created by the old masters during their trajectories and their experiences.

These berimbaus have aspects which link them directly to the candomblé, as well as to other traditions of African origin, in particular with regard to the three atabaques of this Afro-Brazilian religion, which resemble organization and structuring. rhythm of candomblé. A parallel connecting the musicality of these two cultural manifestations, capoeira and candomblé, will show very similar rhythmic cells.

The gunga, a berimbau which emits a deeper and wider sound, appears in the round, playing a role of "march", beating the rhythm which will be executed throughout the round. Its position is highlighted in the hierarchy of instruments. He is directly responsible for activating the codes that trigger the start of the ceremonies, as well as for closing the round. Like the gunga, the most serious atabaque of the candomblé, called "rum", is, most of the time, positioned to the right of the other two atabaques. However, unlike gunga, its function is not to mark, but to make variations and improvisations. Even with this difference, rum and gunga embody the main and dominant role in the musical actions of rituals.

The berimbau viola corresponds, according to the analogy that we have shown, to the smaller atabaque, called "le" in the candomblé. While the viola does the variations and improvisations, the le is responsible for setting the rhythm. The sound of these two instruments fills this space with high-pitched sounds in the rituals of these events. Finally, the average berimbau finds its analogue in the rumpi atac, both serving as a bridge between two sound poles. This harmonizes the dialogue between the bass and treble sounds of the two other berimbaus and atabaques: gunga / viola in capoeira and rum / lé in candomblé.

Article from the inventory for the registration and safeguarding of capoeira in the cultural heritage of Brazil.

Berimbau for kids from Brazil

Berimbau for kids from bahia

Cover for berimbau. Yellow and black

Cover for Berimbau. 6 or 8 wood