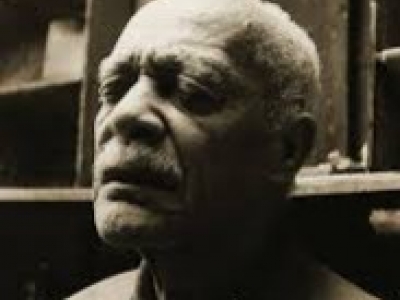 Automatic translation. Translated from Portuguese. In the process of improvement. Thank you for your understanding...

“I was born for capoeira, I only leave capoeira when I die.
I love the game of capoeira. And there is nothing better in my life than capoeira. ”
Vicente Ferreira Pastinha
On April 5, 1889, Vicente Ferreira Pastinha was born, responsible for the dissemination of Capoeira Angola, as well as for the gathering and organization of the principles and foundations of one of the greatest symbols of Brazilian culture.

Son of the Spanish José Señor Pastinha and the Bahian Eugênia Maria de Carvalho, he was born on Rua do Tijolo in Salvador, Bahia.

At the turn of the 19th century to the 20th, Pastinha was introduced to capoeira, according to himself, by sheer luck. When he was around 10 years old, as a result of a row of boys, which he always lost, he met Benedito, a black African who would become his master.

“My life as a child was a little bitter. I found a rival, a boy who was my rival. So, we were fighting. And, at the window of a house, there was an African enjoying my fight with that boy. So when I finished fighting, which I passed, the old man called me: ‘My son, come here!’ I arrived at the window and he then said to me: ‘You can’t fight with that boy. That boy is more active than you. That boy is a rascal! You want to fight with the boy in the race, but you can't. As long as you go home to pry streak, you come here to my cazuá. ’So, I accepted the invitation of the old man, who took to teach me capoeira. Swing over there, swing over there, swing over there, swing over there, fall, get up. When he saw that I was already in a position to correspond with the boy, he said: 'You can already fight with the boy'. So, I left. When I came, his mother saw that I was going to pass by, shouting: ‘Honorato, here you come, buddy.’ From inside the house, the boy jumped in the middle of the street with Satan. Then, he insisted and, when I insisted, fart, he passed his hand. I came out from under. He ran his hand over me again, I went out again. He said: ‘Ah, you’re alive, huh ?!’ He insisted the third time, I hit his hand here and sat his feet. He received, fell. I put my foot back on him, he fell again. His mother went and said: ‘See if you’re not going to be beaten!’ Then I said, ‘You’re going to see him beat now!’. ”

He became a disciple of Benedito and started to visit his house every day given the great interest that capoeira had managed to awaken in him. Pastinha learned in addition to techniques, mandinga. Benedito taught him everything he knew.

During this period, the boy Pastinha also attended the Liceu de Artes e Ofício, where he learned, among other things, the art of painting. In 1902, Pastinha joined the apprentice sailor school, where he would spend eight years of his life. In the Navy, he practiced fencing (trained with sword and rapier) and studied music (guitar), while teaching capoeira to his companions.

In 1910, at the age of 21, he asked to leave the corporation. He left there as a capoeira teacher, an activity he decided to dedicate himself to. During this period, he had to teach his classes on the sly in his own home, as capoeira was included in the Penal Code as a prohibited activity, subject to a prison sentence of two to six months, this period being doubled in the case of “heads or heads” .

It was exactly the hardening of the repression against capoeira that led Mestre Pastinha to interrupt his classes. Between 1913 and 1934, he had to work as a painter, a bricklayer, a newspaper delivery man and even took care of a gambling house.
In 1941, Pastinha was invited by his former student, Raimundo Aberrê, to assist him in the capoeira circle of Jinjibirra (Gengibirra). There, according to Pastinha himself, a surprise awaited him:

“In Jinjibirra, there was a capoeirista group, there was only a master, the greatest masters here in Bahia. Aberrê invited me to come and watch him play, on a Sunday. When I got there, he looked for the capoeira owner, who was Amorzinho, who was a civil guard. He called Amorzinho, Amorzinho in the grip of my hand went and handed over capoeira for me to take care of, saying: 'I have been waiting a long time to give you this capoeira for you to master'. I still tried to avoid it, apologizing, however, taking the floor Mr. Antônio Maré said to me: 'There is no way, no, Pastinha, you are the one who is going to teach this here'. As the comrades supported me, I accepted. ”

Taking on the mission of organizing Capoeira Angola and giving it back its value and visibility, weakened by the emergence and popularization of Capoeira Regional, Mestre Pastinha founds the Capoeira Angola Sports Center (CECA), located in Largo do Cruzeiro de São Francisco, the first Capoeira Angola school. In his academy, Pastinha adopted a uniform with the colors of his heart team, where he trained as a boy, the black and yellow of Esporte Clube Ypiranga.

At this address, consecrated capoeiristas such as Valdemar da Paixão, Noronha, Maré, Divino, Traíra met. The CECA was a school of masters, which transmitted the tradition of angoleiros. There, other great capoeira names were formed, such as Curió, Albertino, Gildo Alfinete, Valdomiro, João Grande and João Pequeno.

Mestre Pastinha always valued the warmth among his students and preached that capoeiristas should not resort to violence when they were loitering (playing). On the contrary, he maintained that calm was capoeira's greatest ally.

“It is the control of the game that protects those who practice it so that it doesn't fall into the excess of anything goes. Note well, I am speaking in the sense of demonstration, not of challenge, because it always brings consequences that are sometimes disastrous. Take away all the beauty and shine of capoeira […] ”

For Mestre, people usually admire capoeira when they realize that it is a fight in which “two comrades play without selfishness, without vanity. It is wonderful and polite. ”

Mestre João Pequeno, a student who received the mission from Pastinha himself to continue the ECSC and its work, summed up well the teachings of the greatest of all angoleiros:

“The capoeirista doesn't have to touch his foot to beat. He must have his body stopped, handled so that when he takes his foot and sees that the opponent has not defended himself, he stops before the foot touches. Because whoever is on the side sees that he didn't hit because he didn't want to. So to hit you don't have to hit your opponent. ”

In recognition of his contribution to Afro-Brazilian culture, in 1966, Mestre Pastinha realized his dream of knowing Africa by representing Brazil through Capoeira Angola, at the 1st World Festival of Black Arts, in Dakar / Senegal. As he was no longer seeing well, as a result of a thrombosis that reached his vision, he did not get to hang around in African lands.

Despite this rare moment of recognition by the Brazilian State for the importance of Pastinha, Velho Mestre worked and committed to the growth of Capoeira Angola almost always without any support or encouragement from public bodies. In contrast, in 1971, he was the victim of the gentrification process (social hygiene) that took place in Pelourinho, a place that was beginning to be targeted by real estate speculation given the strong tourist appeal of the place.

Thanks to the Salvador City Hall to withdraw from the mansion, which would undergo a restoration process, under the promise of returning at the end of this one, Pastinha was forced to move and was never able to return to the famous CECA headquarters, which gave way to a SENAC restaurant.

According to Mestre Curió, a Pastinha student, with a lot of resistance, they gave a space for the academy in Ladeira do Ferrão, known as Ladeira do Mijo.

With this act of disregard and disregard, Mestre Pastinha went into depression and had a severe worsening of his physical health. Pastinha lived his last days living in a dark and humid room, at 14 Alfredo Brito Street, in Pelourinho. Besides the third wife, Maria Romélia, few were the ones who helped Mestre.

After that period he was sent to the Dom Pedro II elderly shelter, where he remained until his death. Mestre Pastinha died blind, almost paralyzed and abandoned, on November 13, 1981, at the age of 92. Brazil lost one of its greatest masters. Not only the master of Capoeira Angola, but the master of popular philosophy.

The great writer Jorge Amado, admirer of Mestre Pastinha and also one of those who supported him in difficult moments of his life, said that he was not only a practitioner of capoeira, but a theorist of it. In his book Capoeira Angola (1965), Pastinha defended the non-violent nature of the game and claimed that capoeira conferred dignity, honor and decency to its practitioners.

Mestre Pastinha's life history and teachings, along with that of other masters, whether they were his students or not, from Capoeira Angola or Regional, motivated other people to practice capoeira, which spread throughout the country and the world, making one of the greatest symbols of Brazilian culture.

The complexity and expressiveness of capoeira led the Instituto do Patrimônio Histórico e Artístico Nacional (IPHAN) to register the Roda de Capoeira and the Craft of Capoeira Masters as Brazilian intangible cultural heritage in 2008, being inscribed in the Book of Registration of Forms of Expressão and the Book of Record of Knowledge, respectively.

Until today, the name of Mestre Pastinha is revered wherever there is a capoeira roda.